This piece was kicked off by some comments I heard from the poet Sean O’Brien on a recent radio programme. Speaking on the BBC’s Private Passions, where guests choose favourite music, and talking about Debussy, he said:

Poetry is always envious of music because that’s what poetry wants to be, whereas music has no need to be poetry. So [poets] are always following in the wake of music – but the two come quite close in sensibility here, it seems to me.

Discuss. Well, for me this immediately brought to mind a comment I once heard attributed to the composer Mendelssohn, to the effect that ‘music is not too vague for words, but too precise.’ So I went and did some Googling, and here’s the original quote:

People often complain that music is too ambiguous, that what they should think when they hear it is so unclear, whereas everyone understands words. With me, it is exactly the opposite, and not only with regard to an entire speech but also with individual words. These, too, seem to me so ambiguous, so vague, so easily misunderstood in comparison to genuine music, which fills the soul with a thousand things better than words. The thoughts which are expressed to me by music that I love are not too indefinite to be put into words, but on the contrary, too definite.

(Source: Wikiquote, where you can also see the original German.)

These two statements seem superficially similar – are they saying the same thing, from different standpoints? One difference, of course, is that O’Brien is specifically talking of poetry rather than words in general. In comparison with prose, poetry shares more of the characteristics of music: it employs rhythm, cadence, phrasing and repetition, and is frequently performed rather than read from the page; and music of course is virtually exclusively a performance art. So that’s a first thought about how poetry departs from the prosaic and finds itself approaching the territory inhabited by music.

But what is the precision which Mendelssohn insists is music’s preserve? It’s true that music is entirely bound up with the mathematics of sound frequency ratios in intervals between notes: it was this that gave Pythagoras and others their obsession with the mystique of numbers, in antiquity. A musician need not be grounded deeply in mathematical theory, but but he or she will always be intensely aware of the differing characters of musical intervals – as is anyone who enjoys music at all, if perhaps more indirectly.

I haven’t read a lot of theorising on this topic, but it seems to me that there is a strong link here with everyday speech. In my own language, as, I should imagine, in most others, pitch and phrasing indicate the emotional register of what you are saying, and hence an important element of the meaning. One can imagine this evolving from the less articulate cries of our ancestors, with an awareness of intervals of pitch developing as a method of communication, hence fostering group cohesion and Darwinian survival value. Indeed, in some languages, such as Chinese, intonation can be integral to the meaning of a word. And there’s scientific evidence of the closeness of music and language: here’s an example.

So, going back to Mendelssohn, it’s as if music has developed by abstracting certain elements from speech, leaving direct, referential meaning behind and evolving a vocabulary from pitch, timbre and the free-floating emotional states associated with them. Think for a moment of film music. It can be an interesting exercise, in the middle of a film or TV drama, to make yourself directly aware of the background music, and then imagine how your perception of what is happening would differ if it were absent. You come to realise that the music is often instructing you what to feel about a scene or a character, and it often connects with your emotions so directly that it doesn’t consciously occur to you that the feelings you experience are not your own spontaneous ones. And if you add to this the complex structures formed from key relationships and temporal development, which a professional musician would be particularly aware of, you can start to see what Mendelssohn was talking about.

The musical piece O’Brien was introducing was the ‘Dialogue between the wind and the sea’ from Debussy ‘s La Mer. In other words,a passage which seeks to evoke a visual and auditory scene, rather than simply exploring musical ideas and the emotions that arise directly from them. By contrast, we could imagine a description of such a scene in prose: to be effective the writer needs to choose the words whose meanings and associations come together in such a way that readers can recreate the sensory impressions, and and the subjective impact of the scene in their own minds. The music, on the other hand, can combine its direct emotional access with an auditory picture, in a highly effective way. 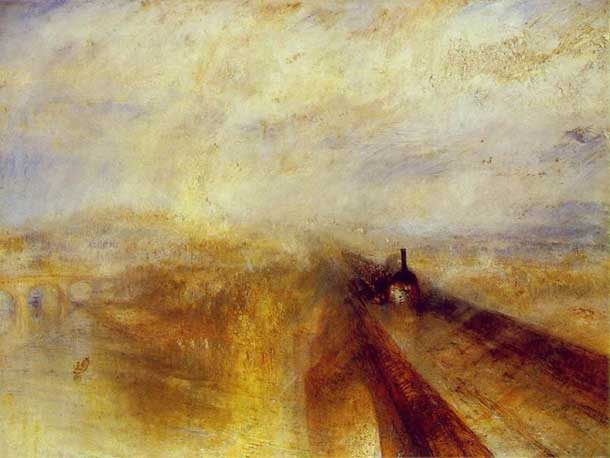 I was trying to think of an equivalent in visual art, and and the painting that came to mind was this one, with its emphasis on the raw sensory feelings evoked by the scene, rather than a faithful (prosaic) portrayal. In his use of this technique, Turner was of course controversial in his time, and is now seen as a forerunner of the impressionist movement. Interestingly, what I didn’t know before Googling the painting was that he is also known to have influenced Debussy, who mentions him in his letters. Debussy was also sometimes spoken of as impressionist, but he hated this term being applied to his work, and here is a quote from one of those letters:

I am trying to do something different – an effect of reality… what the imbeciles call impressionism, a term which is as poorly used as possible, particularly by the critics, since they do not hesitate to apply it to Turner, the finest creator of mysterious effects in all the world of art.

I like to think that perhaps Debussy is also to some extent lining up with Mendelssohn here, and, beside his reference to Turner’s painting, maybe has in mind the unique form of access to our consciousness which music has, as opposed to other art forms. A portrayal in poetry would perhaps come somewhere between prose and music, given that poetry, as we’ve seen, borrows some of music’s tricks. I looked around for an example of a storm at sea in poetry: here’s a snippet from Swinburne, around the turn of the 20th century, describing a storm in the English Channel.

As a wild steed ramps in rebellion, and and rears till it swerves from a backward fall,
The strong ship struggled and reared, and her deck was upright as a sheer cliff’s wall.

In two lines here we have – besides two similes with one of them extended into a metaphor – alliteration, repetition and rhyme, all couched in an irregular, bucking rhythm which suggests the movement of the ship with the sea and wind. Much in common here, then, with a musical evocation of a storm. This I take to be part of what O’Brien means by poetry ‘wanting’ to be music, and being ‘close in sensibility’ in the example he was talking about.

But I don’t see how all this implies that we should somehow demote poetry to an inferior role. Yes, it’s true that words don’t so often trigger emotions as directly, by their sound alone, as does music – except perhaps in individual cases where someone has become sensitised to a word through experience. But the Swinburne passage is an example of poetry flexing the muscles which it alone possesses, in pursuit of its goal. And even when its direct purpose is not the evocation of a specific scene, the addition of the use of imagery to the auditory effects it commands can create a very compelling kind of ‘music’. A couple of instances that occur to me: first T. S. Eliot in Burnt Norton, from The Four Quartets.

Garlic and sapphires in the mud
Clot the bedded axle-tree.
The trilling wire in the blood
Sings below inveterate scars
Appeasing long-forgotten wars.

I’m vaguely aware that there all sorts of allusions in the poet’s mind which are beyond my awareness, but just at the level of the sound of the words combined with the immediate images they conjure, there is for me a magic about this which fastens itself in my mind, making it intensely enjoyable to repeat the words to myself, I just as a snatch of music can stick in the consciousness. Another example, from Dylan Thomas, known for his wayward and idiosyncratic use of language. This is the second stanza from Especially When the October Wind:

Again, I find pure pleasure in the play of sounds and images here, before ever considering what further meaning there may be. But what I also love about the whole poem (here is the poet reading it) is the way it is self-referential: while exploiting the power of words, it explicitly links language-words to  images – ‘vowelled beeches’ rhymed with ‘water’s speeches’. The poet himself is ‘shut in a tower of words’ .

But, returning to the comparison with music, there’s one obvious superficial difference between it and language, namely that language is generally ‘about’ something, but while music is not. But of course there are plenty of exceptions: music can be, at least in part, deliberately descriptive, as we saw with Debussy, he while poetry often does away with literal meaning to transform itself into a sort of word-music, as I’ve tried to show above. And another obvious point I haven’t made is that words and music are often – perhaps more often than not – yoked together in song. The voice itself can simultaneously be a musical instrument and a purveyor of meaning. And it may be that the music is recruited to add emotional resonance to the language – think opera or musical drama – or that the words serve to give the music a further dimension and personality, as often in popular music. In the light of his statement above, it’s interesting that Mendelssohn is famous particularly for his piano pieces entitled Songs Without Words. The oxymoron is a suggestive one, and he strongly resisted an attempt by a friend to put words to them.

But the question of what music itself is ‘about’ is a perplexing, and perhaps profound one. I am intending this post to be one approach to the philosophical question of how it’s possible for one thing to be ‘about’ another: the topic known as intentionality. In an interesting paper, Music and meaning, ambiguity and evolution, Ian Cross of the Cambridge Faculty of Music explores this question (1), referring to the fact that the associations and effects of a piece of music may differ between the performer and a listener, or between different listeners. Music has, as he puts it, ‘floating intentionality’. This reminds me of a debate that has taken place about the performance of early music. For authenticity in, say 16th century music, some claim, it’s essential that it is played on the instruments of the time. Their opponents retort that you won’t achieve that authenticity unless you have a 16th century audience as well.

Some might claim that most music is not ‘about’ anything but itself, or perhaps about the emotions it generates. I am not intending to come to any conclusion on that particular topic, but just to raise some questions in a fascinating area. In the next post I intend to approach this topic of intentionality from a completely different direction.