These days the last leg of my journey into work is by bus. This is because, given my advanced age, I qualify for a bus pass, which saves me enough money to make it worthwhile. What hadn’t really struck me was, as my daughter had already told me, how much more civilised a form of transport it is than the tube (underground or metro, for non-UK readers). Instead of a brutal ten minutes of shoulder-to-shoulder, er – (as I try to think of a suitably claustrophobic word here, my spookily intelligent phone keyboard suggests ‘wrongness’. OK – ‘shoulder-to-shoulder wrongness’ will do very well.) So instead of ten minutes of that, a long way underground, I have twenty minutes of mature reflection as I survey busy London streets from wide top deck windows. And the frequent background of Eastern European chatter creates a sense of being delocalised, as if I am viewing the frenetic urban activity below from some privileged, remote vantage point.

And here’s some proof, found in the back of a drawer by my sister. Also proves my age, unfortunately.

As this mobile ivory tower lurches and judders around corners and through traffic lights I sometimes think of a dictum of Margaret Thatcher’s: ‘If a man of over 26 finds himself on a bus he must consider himself a failure.’ I’m 64, so I don’t know what that makes me. And in this connection I also think of a school friend of mine, who, when we were about 12 or so, was quite single-mindedly fascinated by everything to do with buses. I caught the bug too, and for a year or two would join him on ‘Red Rovers’ (bus tickets that gave you travel all over London for a day), visit bus garages, and even take black-and-white photos of buses with our Kodak Brownies (remember them?). I can recall my mother gawping at my photo album, and obviously wondering what sort of psychological backwater her son had ended up in.

Well, (typically for me) the enthusiasm didn’t last long. But my friend proceeded to a career in management with London Transport, while marrying and raising a family. I haven’t seen him for a while, but I’ve heard that now, with that responsibility discharged, he is doing what he always really wanted to do – he drives a bus. And this seems to me to be a resounding success in life, although it wouldn’t register on the Thatcher scale.

Before expanding on the character of the former prime minister I naturally checked by Googling the quotation, to only to find that she never actually said it. It’s a sobering experience, having launched your carefully engineered, watertight Titanic of an argument, only to have it encounter the iceberg of a factual inaccuracy. My lifeboat will have to be the thought that it wouldn’t have been attributed it to her unless it had seemed to fit. And the point I was going to develop – which is now thrashing about in the freezing water but still alive – was how essentially one-dimensional her outlook was. Much more a conviction politician than many others, and one of immense strength of personality – but as we all know, a current gathers greater force when constricted into a narrow channel.

Perhaps this accounts for how polarised people’s opinions about her tended to be. Either you admired the ‘iron lady’ strength of character, or if your politics differed, then what you saw as forceful wrong-headedness inspired a forceful dislike. Thus she became the Marmite of politicians: I don’t know if this is known beyond the UK, but Marmite is a yeast extract spread which is famous for being either adored or reviled – indifference is rare. (I’m an exception; I can take it or leave it, and I mostly leave it.)

Which takes me back to a residential poetry course I did a few years ago. One of the tutors was the poet Sean O’Brien. When the Marmite controversy arose at breakfast one morning, he nailed his colours firmly to the Marmite-lovers’ mast. (On Thatcher, his politics would put him in the other camp – see for example his wonderful poem Cousin Coat.)  I hope he won’t mind me playing fast and loose with his copyright, but the next day the following little poem appeared, and has since found its way into his collection November. 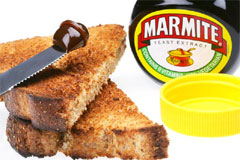 The Plain Facts of the Matter

There are two tribes this world can boast:
The Marmite-lovers and the damned.
Fact is, though, everybody’s toast
Whatever breakfast they’ve got planned.

It’s not for us to turn away
The sort who shun the dark brown jar,
But sure as sure come Judgement Day
The Lord will know who His folk are.