You might expect that, now I am at leisure and living beyond the end of that line, I’d have had lots more opportunities to write, and would be producing blog posts by the dozen – but in fact it’s not been until now that I felt one coming on. It’s partly the need to reorientate my perspective on everyday life, while at the same time getting to grips with all the jobs around the house and garden that have been neglected until now. And of course I don’t any longer have that strangely stimulating combination of movement, crowding and solitude which, as I mentioned a couple of posts ago, daily train travel provides. So far I’m actually finding less time to read, rather than more – a matter I shall have to put right.

But, behind it all, I do feel some sort of altered perception quietly forming itself. I’m finding a quiet pleasure in repetitive, mentally undemanding tasks – maybe many of us need more of this sort of offline activity in which to make some sort of space to stretch our mental limbs. However for now, I’d just like to revisit my first week of retirement, which was something in the nature of a holiday. We did a little bit of gentle travelling which gave me plenty of opportunity to just look, in the spirit of innocence that I wrote about last time. And so here are a few highlights, revisited with the help of some photos and not too much commentary.

The middle of the week saw us in Sussex, up on the South Downs. I hope this picture, taken in the high clump of trees known as Chanctonbury Ring, gives a feel of the day:

And a few days after this rare rural idyll, we were in  a city – Norwich, which I often visit for family reasons. Like all cities which have a long and rich history but are still thriving, there are piquant juxtapositions of old, young (and perhaps middle aged) wherever you look. Here’s one I happened to record:

Or there is just the old – sun on the cloisters at Norwich Cathedral:

And in the cathedral itself, there’s an evocative artwork by the Brazilian sculptor Ana Maria Pacheco:

We are told it’s based on a scene from Virgil’s Aenead – Aeneas carrying his father from the ruins of Troy. I found it quite compelling – it’s the size of the faces, and the way their expressions are rendered, that commands your attention. The style seems like a blend of contemporary and medieval, giving a sense of the timelessness of the emotions depicted; and the cathedral setting adds to this. It put me in mind of some of the topics I’ve thought of writing about here: current attitudes to religion, and how humans and their ways of thinking can change (and also how they don’t change) across time.

More about the artwork here while the exhibition is on.

Among what would probably nowadays be called the commuting community − if it weren’t so hard to say, that is − things have changed over the years. In my previous incarnation as a commuter, before I spent a period working from home (something like 20 years ago) the range of train-bound activities was different. Most newspaper readers struggled with big broadsheets, trying vainly to avoid irritating their neighbours by obscuring their vision or tickling their ears as they turned the pages. Now they will either skim through a free tabloid (for London commuters like me there’s the Metro in the morning or the Standard on the way home) or skip nimbly through the contents of a morning daily on their tablet. If any were using mobile phones they could only at that time have been either texting or talking on them. The rumbling of the train was punctuated by the raucous piping of that horrible Nokia tune, or some other crude electronic noise. Reading on my journey now, I’m often startled by a sudden explosion of pop music, a brass band, a morning chorus of twittering birds or a concussion of breaking glass. It takes a few moments of perplexity before you come to and realise it’s just another ring tone.

Laptop computers in those earlier times were still sufficiently rare that one man I worked with avoided using one on the train because he was afraid everyone would think he was showing off. In the intervening years they multiplied rapidly for a while, only to have their entertainment functions largely replaced by tablets and smartphones. Of course there are still the laptop diehards, mostly using the train as an extension of the office. A discreet glimpse over one of their shoulders usually shows them to be working on a financial spreadsheet, or bent over some programming code. Such dedication! It may not save me from being a dull boy, but I do take care to keep my commuting time free of work − of that sort of work, anyway.

Many of course just lose themselves in music on their noise-cancelling headphones. There’s one man on my train every day, in both directions, whom I have never actually seen without a large pair of headphones on − and that includes his walk to and from the station. I often wonder whether they have been surgically implanted. And a whole new range of activities has sprung up that were not possible formerly, the most popular of all being just to play with your smartphone. That’s what I’m doing now, in writing this, if it counts as playing, which it probably does. From where I’m sitting now, on the morning train, just at my end of the carriage I can count four Metros, one Kindle, one book, one laptop, two phone-fiddlers (including me) and one handheld game console, right next to me. The iPads seem unusually rare today − although I have just spotted one up the other end of the carriage. That leaves two deep in conversation, one asleep, and two looking out of the window − earnest students of misty early morning fields, grazing cows, builders yards and back gardens ranging from the fanatically neat to the chaotically neglected.

And so the rows of heads comprising this very twenty-first century aggregation of social chit-chat, dreams, electronic jitterbugging and imaginary digital worlds sway in synchrony with the jolting of the train as it rattles towards the capital. In the meantime I am realising that this piece, intended as an introduction to a review of some of my recent fiction reading on the train, has outgrown its purpose and will have to be a post on its own. The reviewing will be coming next.

It’s now two weeks since the Venice visit I mentioned last time, and I haven’t had sufficient reflection time to conjure up a blog about it, or about anything else for that matter. But looking at some of my photos has brought it back to mind – so here we go.

It has been the first time my wife and I have gone there together, if we discount an impossibly hot day spent there 12 years ago with the children, who then still were children. This time, among the beautiful, ancient architecture and the rampant tourism, it struck me how there is nowhere else I know that history mixes so intimately with brash modernity. Everywhere you are surrounded by the fading grandeur that Italy does so much better than anywhere else. Like a party of very elderly ladies on Blackpool beach, the clustered buildings wrap their gothic dignity about them, persisting serenely among the seething bees’ nest of tourist activity that has its focus in the scrum of St Mark’s Square.

We approach the square on a warm day over a crowded canal bridge, and as we climb the steps we are buffeted by our fellow tourists’ backpacks and factor 10 smeared elbows. Just as 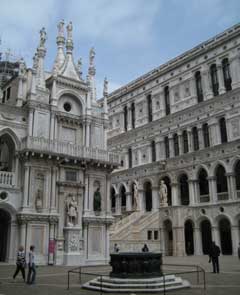 we reach the top, the Bridge of Sighs comes into view, and there’s a frenzy of digitally simulated shutter clicks. On we go, and brave the queue to get into the Doge’s Palace, then being rewarded with its gorgeous art and architecture. We pass under Tintoretto’s spectacular battle scenes, and before leaving walk through a long succession of halls filled with vicious medieval weapons of war. They shift your perception from Venice as a graceful old lady, to appreciating it as a city state jealously guarding its position in the rivalry and commercialism of the middle ages.

On, and out into the warren of alleyways among the buildings packed between the canals. Muscular men scurry around the strolling tee-shirted and camera-clad visitors, dragging laden trolleys of goods to restock the tourist shops. The background sound is of the canal water slapping against the mildewed brickwork, where pink stuccoed gothic descends into its muddy, hidden foundations. We take a vaporetto to see the city from the water, and my first, uninspired photo from the boat turns out to have an addition I don’t notice when I took it:

It adds something to what would have been an unoriginal image – the hand of God? Well if  so, it’s conspicuously absent thereafter. One day and a few mosquito bites later, we set out for some of the outer islands. On Murano there are the glassblowers, nonchalantly practising their lifetime, unfathomable skills in front of us gawping tourists.

And then Burano, where we are struck by the leaning church tower, which I hadn’t known about. Well, the hand of God has had hundreds of years to do something about that – but no luck.

This island is known for its colourful houses – apparently if you want to paint your house here you have to apply to the local authority, which will graciously assign you a colour. We spent some time wondering whether the washing hung out at the front (very Italian) was deliberately colour co-ordinated with each house.

Next stop, just opposite Burano, is the peaceful, rural island of Torcello – seeming particularly quiet and pastoral after Venice itself. My only pious intention of our visit was to go to the church of Santa Maria del Assunta, one of Europe’s oldest. It boasts spectacular 11th century mosaics over the altar. I was lucky enough to see these, nearly 30 years ago, on a work trip, and wanted to refresh my memory. We realised the time had got to 5.45, and our guide book said it was open until 6. But the sign when we got there, in English: Last entry 5.30. We tracked down the man in charge, but he was adamant. No go. So the hand of God was not willing to make another appearance on our behalf.

Ah well – next time, perhaps – if He grants me another 30 years.