I thought I had invented the word,  but on googling, I find there’s nothing new under the cybersun. Antiversary, according to my search, has been adopted to mean the anniversary of a split-up, or a divorce, rather than a wedding. Well I’m going to stick with the meaning I coined back in March 2013 at the time of my 500 day antiversary: it’s the celebration of an event a given time before it happens, rather than after*. And here I am at my 100th. Days, of course, not years; the prospect of another hundred years of commuting would find me under the train rather than in it. 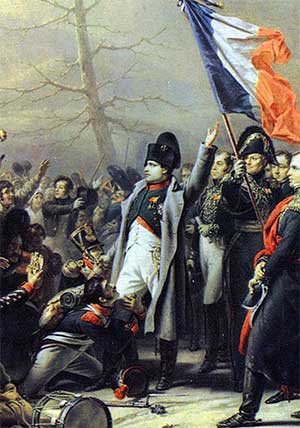 “100 days” always reminds me of a prime minister who,  in 1964, before the start of my working career, gave himself that time for ‘dynamic changes to get Britain moving again’. This was Harold Wilson, in 1964, whom I am old enough to remember quite well.  I expect he was consciously taking a leaf out of the book of previous politicians – but presumably not the one who was originally associated with the phrase. This, it seems, was Napoleon, who returned from exile in Elba to rule France again, on 20 March 1815. His last cent jours as Emperor ended after defeat at the Battle of Waterloo.

It was in the USA that the yardstick of 100 days was taken up as a way of measuring the effectiveness of presidents on taking up office, and the first, and most successful, was Franklin D. Roosevelt, whose ‘New Deal’ began America’s recovery from the depression. Inevitably, later presidents, and indeed Harold Wilson in Britain, did not bask in such widespread approval after their own inaugural 100 days. Fortunately I don’t have to fight a battle or put a country back on its feet, but just coast gently towards the day when the work really begins: house and garden to be taken in hand, years of accumulated debris to be cleared, vegetables to be, grown, blog posts – and perhaps other things – to be written. How much time I will have for all that is, you might say, yet to be determined. And at almost the same time as my 100 days ends, that of another government in the UK will start. What sort of government that will be, and whether indeed it will last that long, is anyone’s guess at the moment.)

So now the much-anticipated moment has moved closer, and become certain; we’ve taken the financial advice and started to make the arrangements, and I have made my intentions public at work. I mentioned in a recent post how broaching the subject of retirement might be a bit of a conversation-stopper in terms of company culture. When I made my announcement at an informal meeting, I felt a sort of collective frisson shiver through the room, as younger colleagues suddenly sensed the proximity of something thought of as remote and unreal. “Congratulations!”, said one, with a sort of well meant awkwardness.

I’m not sure whether I deserve to be congratulated on anything, but it’s obvious to any reader of this blog how much I savour the prospect of retiring.  However after nearly fifty years of working life, with few breaks, there’s a rather uncomfortable feeling of cutting myself adrift from my source of sustenance. The only time I have known the branch I was sitting on to have been sawn off was when the company I was working for folded; but now here I am, busy doing the sawing myself. Can that be sensible? 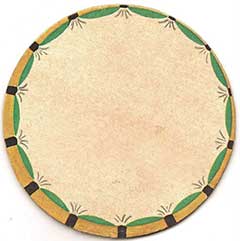 My pension, seen as I hurtle towards it
(Ed Berg/Wikimedia)

It’s as if I’m together with fellow workers in a building (as of course I literally am) but in the metaphorical building I’m thinking of, some, leaving for other jobs, simply take the lift down to the ground floor and walk sensibly out of the main door into another building. I’m a bit concerned about the way these suicide-related images keep occurring to me, but here’s the only retirer I’m aware of at my workplace – me – gaily jumping out of the office window on the assumption that his pension safety net is held,  stretched out, by strong hands far below.

Maybe it’s the prospect of doing nothing while being paid – it doesn’t seem real to me. Yes, I know it’s more that I’ve actually built up a fund over time by making contributions, etc etc – but there’s still an eerie unreality about the thought of spending the day doing as you please and still getting money, even if rather less than before.

So a hundred more commuting days left, which I celebrate here with strangely mixed feelings. No snatch of doggerel to celebrate this antiversary, as there was for the 500th – for one thing, I exhausted all the possible rhyme words for ‘antiversary’. For a while now I haven’t been inspired to express myself more seriously in poetry, either; but perhaps retirement will give me a chance to look out that muse from wherever she’s hiding. But I am planning to revive one poem for the New Year.

And I’ll only add that, while engrossed in tapping this into my tablet on the train, I failed to notice the station I should have changed at, and had to get out at the next stop to go back and catch a later connection. I’m not even a competent commuter any more. Definitely time to think about stopping.

*My son suggests that the word should be ‘anteversary’ (ante = before). So there we are. I can have my word and the divorcees can keep theirs.

It wasn’t clear at all what it referred to, so we can only assume it refers to itself. But if it’s not in use…

How does the Department of Transport expect us to interpret these signs? I think we should be told. I have a mental picture of the people in government departments, faced with such difficult questions from the public, speaking as they used to in old films (and still do in some new films): “Let’s feed it into the computer and see what it comes up with.”

I think the Department of Transport should take on an adviser in philosophical logic to avoid these dire consequences.

It’s now two weeks since the Venice visit I mentioned last time, and I haven’t had sufficient reflection time to conjure up a blog about it, or about anything else for that matter. But looking at some of my photos has brought it back to mind – so here we go.

It has been the first time my wife and I have gone there together, if we discount an impossibly hot day spent there 12 years ago with the children, who then still were children. This time, among the beautiful, ancient architecture and the rampant tourism, it struck me how there is nowhere else I know that history mixes so intimately with brash modernity. Everywhere you are surrounded by the fading grandeur that Italy does so much better than anywhere else. Like a party of very elderly ladies on Blackpool beach, the clustered buildings wrap their gothic dignity about them, persisting serenely among the seething bees’ nest of tourist activity that has its focus in the scrum of St Mark’s Square.

We approach the square on a warm day over a crowded canal bridge, and as we climb the steps we are buffeted by our fellow tourists’ backpacks and factor 10 smeared elbows. Just as

we reach the top, the Bridge of Sighs comes into view, and there’s a frenzy of digitally simulated shutter clicks. On we go, and brave the queue to get into the Doge’s Palace, then being rewarded with its gorgeous art and architecture. We pass under Tintoretto’s spectacular battle scenes, and before leaving walk through a long succession of halls filled with vicious medieval weapons of war. They shift your perception from Venice as a graceful old lady, to appreciating it as a city state jealously guarding its position in the rivalry and commercialism of the middle ages.

On, and out into the warren of alleyways among the buildings packed between the canals. Muscular men scurry around the strolling tee-shirted and camera-clad visitors, dragging laden trolleys of goods to restock the tourist shops. The background sound is of the canal water slapping against the mildewed brickwork, where pink stuccoed gothic descends into its muddy, hidden foundations. We take a vaporetto to see the city from the water, and my first, uninspired photo from the boat turns out to have an addition I don’t notice when I took it:

It adds something to what would have been an unoriginal image – the hand of God? Well if  so, it’s conspicuously absent thereafter. One day and a few mosquito bites later, we set out for some of the outer islands. On Murano there are the glassblowers, nonchalantly practising their lifetime, unfathomable skills in front of us gawping tourists. 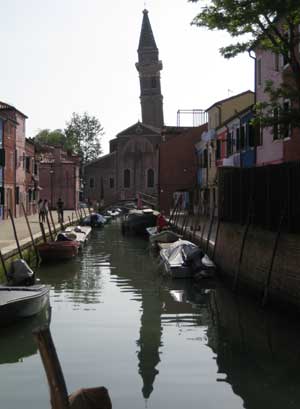 And then Burano, where we are struck by the leaning church tower, which I hadn’t known about. Well, the hand of God has had hundreds of years to do something about that – but no luck.

This island is known for its colourful houses – apparently if you want to paint your house here you have to apply to the local authority, which will graciously assign you a colour. We spent some time wondering whether the washing hung out at the front (very Italian) was deliberately colour co-ordinated with each house.

Next stop, just opposite Burano, is the peaceful, rural island of Torcello – seeming particularly quiet and pastoral after Venice itself. My only pious intention of our visit was to go to the church of Santa Maria del Assunta, one of Europe’s oldest. It boasts spectacular 11th century mosaics over the altar. I was lucky enough to see these, nearly 30 years ago, on a work trip, and wanted to refresh my memory. We realised the time had got to 5.45, and our guide book said it was open until 6. But the sign when we got there, in English: Last entry 5.30. We tracked down the man in charge, but he was adamant. No go. So the hand of God was not willing to make another appearance on our behalf.

Ah well – next time, perhaps – if He grants me another 30 years.

Five hundred days to go – I couldn’t let that go by without comment. It’s a sort of backwards anniversary, or anti-anniversary. Let’s call it an antiversary.

So here’s something to celebrate it:

A quincentennially starred antiversary
Needs observance that’s more than just cursory.
Despite notions you’ve got
From my profile shot
I’ve come a long way from the nursery.

My hope from today’s antiversary
That my pension will build to a bursary
Means I cannot start shirking
But must go on working –
For time is a fearsome adversary.

(If you’re a pronunciation freak, I’m sorry about the last line. I was out of rhyme words.)