In my post a while back about psychogeography, I mentioned a book called Tunnel Visions by Christopher Ross. Ross is the man who took a job as a station assistant on the London Underground, primarily just to observe and reflect on his fellow humans as they travelled, the very readable result being this book. I had mislaid it in the disordered book-drifts that lie about our house, but finding it again recently I re-read it. In the book Ross mentions a previous professional job which he left in order to travel and experience other cultures – he occasionally refers to these by way of contextualising some of our own peculiarities. Returning to England, he took the Underground job to further his own particular philosophical investigations. I was interested to find that, in the book’s Amazon reviews, there’s one by someone who came across him in his original job, and and mentions that he was a very capable tax lawyer. Evidently his need to engage with the world in a fresh way outweighed any material benefits or intellectual satisfaction in the job. Here’s his preferred metaphor for the fate he had escaped: 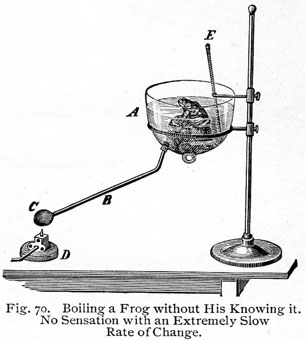 The boiling frog was a favourite object lesson and it was always hopping into my mind. In order to push back the boundaries of scientific discovery, scientists found out that frogs have nervous systems poorly adapted to register slow incremental change. So if you sit one in a saucepan of water and slowly heat it, the poor frog will stay where it is and boil to death.
We become chiropodists and lawn mower salesmen by a series of imperceptible ‘choices’ and by the time we realise what we’ve done, we’re boiled.

Well, I’ve no doubt that the world is replete with happy and fulfilled chiropodists and lawn mower salesmen, but you know what he means. Of course there are those who have a life plan settled in their minds when they are barely out of childhood, and proceed to stick to it – I’ve met one or two. Michael Heseltine, the former Conservative minister, famously wrote his down on the back of an envelope at the start of his career. It involved making a lot of money, entering parliament, and audaciously ended with ‘Prime Minister’. Only that last step eluded him.

And there are those like Ross himself – the free spirits – who are determined to try and make the world yield up its secrets by taking a more fresh and unconventional approach, probably giving up much comfort and prosperity in order to do so.

But most of us are much more like the frog. You start off in the career stakes with one of the jobs that happen to be there when you need one – most likely the one where your personality chances to gel with the people in the interview. And sooner or later you happen to see an ad for another job with a better salary, and which you realise you now have the experience for – and so on. And by this time you may have children who need feeding and housing, and you can’t step off the treadmill even if you want to.

I rather think, looking around the train at my fellow commuters, that some of them have the air of well-cooked amphibians. Maybe I can claim not to be thoroughly boiled, but can’t deny that I am at least lightly braised. I envy Ross his courage and independence, but I wouldn’t have given up the chance to raise children: parents can find at least as much fulfillment, and valuable life experience, as any philosophical nomad.

Maybe that’s something he still aims to fit his life around; I don’t know – he doesn’t say. I have searched the internet to find out what he’s been up to in the 12 years or so since the book was published,  but haven’t found anything. But I doubt whether he’s fallen back into the evil scientist’s flask.

What about you? I’d like to hear whether you consider yourself to be gently simmering, or good, fresh and raw.